I’ll start with a few pictures of the KMA from a couple of weeks ago and then I’ll launch into what promises to be an amazing weekend for music in the city. Today’s post begins with Alive After Five two weeks ago. The show is hosted at KMA by Michael Gill and features superb music, beverages for purchase and a reasonably priced catered meal, admission to the museum and free popcorn for a very modest price. It’s a very cheap, but classy date. What could be better than that?

The music generally veers toward jazz and blues with a healthy sprinkling of other genres. Two weeks ago the featured artists were the Streamliners who play big band style jazz music. Most, if not all, of the members also play in the Knoxville Jazz Orchestra which, if you haven’t figured it out from this blog, provide our city with all sorts of excellent musicians playing every shade of jazz in the known world.

The kicker this particular night was a promised guest slot for R.B. Morris which, on the face of it, seems like an odd mix, but for the two songs they performed, it was really excellent. One was a standard and the other was “Copper Penny,” the classic, clever RB song. Those of us who have been fortunate enough to hear RB sing Marty Robbins songs know what RB can do with his voice when he’s of a mind to. And he was definitely of a mind to that night.

He rocked, moved about the stage like a slick jazz man, bopping to the rhythms of the band and simply looked like this was his main gig. It was as if this swing man had simply idled away the years as this singer-songwriter while holding this secret passion for the big band world. In any case, he seemed to have a blast and so did, always present, crowd of dancers and diners. 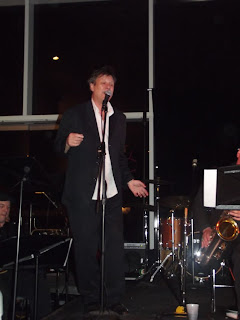 It was a stop on our First Friday tour, but it happens most Friday nights and this one is no exception. Jenna and  Her Cool Friends will rock the house with their mix of blues and more blues. I’ve written about Jenna playing Alive After Five before. This is a band to see if you have any interest at all in that genre. Jenna Jefferson can belt and croon, make you dance and make you swoon. Watch out – her husband is in the band!

Seriously, Jenna has an encyclopedic memory for the details that make the music come alive. She can spin stories about the artists and the songs all night long. And they can play. Seriously play. They are headed for Memphis soon for a blues version of the Battle of the Bands where they have done very well in the past. The band is popping and I would not lead you wrong on that front. They practice just outside my home, so I can testify. You can’t hear them on Sunday afternoons like I can, so Friday night is your chance: 6:00 – 8:30 at the KMA.

She’s got some great competition across town. The lovely Bijou Theater will be the site of an outbreak of all things Donna the Buffalo. This excellent touring band from parts to the north is always great fun and the uplifting lyrics, groovy organ and general hipness will not leave you frowning.

But wait, there’s more! This weekend, if you aren’t in bed dying from an exotic disease, you have no excuse for not hearing great music. Saturday at noon WDVX hosts Fred Eaglesmith for the Blue Plate Special. I wrote about it the last time he appeared. It was amazingly good. I immediately bought his album “Cha Cha Cha” and have enjoyed it every since. He’s back and he’ll also perform at the Shed this weekend, touring in support of his latest album, “Six Volts,” to be released in download form next week and physically in about three weeks. Be there early if you want to see the stage.

Saturday night Boyd’s Jig and Reel has outdone themselves by booking Blue Mother Tupelo. This power duo with their intricate harmonies and country-rock, southern twang are just the ticket for a great evening of music. Pick up dinner at the Jig and Reel and have music for desert. It’s an amazing deal. These people should be playing to thousands of people at a time and you get them in an intimate setting for this free show. What’s not to love?

So, there you go: a great weekend of music and much of it free. It’s about as good as a musical weekend in the city could be for my tastes. I hope to see you at the shows!