I recently attended an extended, Saturday version of the Blue Plate Special in conjunction with WDVX and their spring fund drive. If you don’t know, WDVX is a non-profit radio station heard at 89.9 FM outside of downtown and 102.1 FM inside the city. It’s also available as a live stream at http://www.wdvx.com/.

This is no ordinary radio station. It is important to East Tennessee and, arguably, the country and world. It carries on a great tradition of live radio broadcasts from Gay Street in Knoxville, which was started by WNOX (originally WNAV) broadcasting the Mid-Day Merry-Go-Round. WDVX also preserves music forms indigenous to our area which might otherwise fall further into obscurity. Playing many forms of music, the focus is on bluegrass every morning, Americana every afternoon and a mix of blues, singer-songwriter, classic country and other music forms at other times. Broadcasting all over the world via the World Wide Web, it gives Knoxville an international presence.

Twice each year they ask for listeners to make pledges to keep the music and the idea alive. This particular Saturday featured several artists (pictured) including local artists, regional artists and national recording star James McMurtry who was in town to play at the shed in Maryville. You might check out his latest album,  Just Us Kids

among many other works. 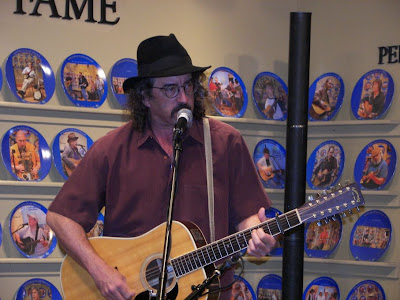 The free show ran for hours and was great fun. The highlight of the day had to be the Wedding performed by Ferd Moyse, who recently became ordained in some manner or another and is now licensed to perform weddings. The young couple seemed delighted with his execution of the ceremony which included much laughter and phrases like, “this is where you say that stuff about forever” and “do ya’ll have anything else to say?” He pronounced them married and more music and the first dance commenced.

The official fund drive is over, but if you’d like to support the spirit of this enterprise, I’d encourage you to do so. They need and deserve your help. You can pledge your support by calling 865-544-1029 or visiting WDVX’s website at www.wdvx.com.