I was asked recently about the funding for James Agee Park. The gentleman who asked was interested in helping with the park in some way. I believe he mistook me for the person who was appointed to an interim position on city council. I didn’t point out his mistake, choosing instead to direct him to the only person I know who would have information on the park: R.B. Morris.

I know very little about the park. I remember when R.B. and others lobbied the city for a plot of land in the Fort Sanders area. James Agee was at 15th and Highland and lived there early in his life. That home is the setting for his classic work A Death in the Family. Of course, the home was demolished and an apartment building replaced it. 15th Avenue was renamed James Agee

in 1999. Unfortunately, it becomes Philip Fulmer Way as it crosses Cumberland.

If you read the site entitled James Agee Park History, you will find that the title is misleading. It gives the background of James Agee, but not the history of the park itself. Another portion of the city’s website says it was dedicated in 2003, gives directions (corner of Laurel and James Agee), and mentions the Agee quote engraved at its entrance: “To those who in all times have sought truth and who have told it in their art or in their living.”

More embarrassing than not knowing anything about funding was the fact that I didn’t even know the location of the park. As much as I had cheered for the efforts to secure it and as close as I live to it, I had never tried to find it. Initially I walked up James Agee thinking I would see it. I didn’t without looking at the address. I think during one pass I was blinded by the hanging shoes I’ve photographed before. I heard someone call this a mobile. Does anyone know the story behind that?

After securing the address, I took another turn and sadly, I was underwhelmed when I found it. There are a few benches, some overgrown flowerbeds and a small path winding in a circle around a very small plot of ground. It turns out I had walked past it many times without realizing it was a park of any kind. There are stone colunms at the entrance, but I’d assumed they belonged to one of the large homes located on either side of the park and that the park itself was part of the lawn. 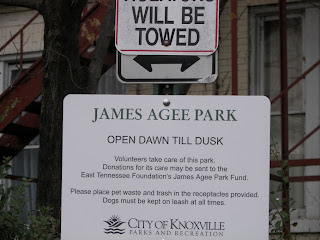 As I mentioned earlier, there is the one quote visible in the cement if you look for it. It is unattributed. The words “James Agee Park” are inscribed on the columns, but they aren’t easily viewable from the street. There is a street sign that states it is a park, but that, also, it is, ironically, not on the street. There is nothing further about who James Agee might have been for the benefit of the uneducated passerby. Certainly there is no statue, which would certainly be appropriate.

I’m glad the effort was taken to secure this small memorial to such an important Knoxvillian. I appreciate each person who worked to make it happen. I simply wonder if we couldn’t do a little more. What about a statue? I’ve heard talk of erecting statues of coaches and players on the UT campus, what about a little love for a Pulitzer Prize winner? Could there be a historical other marker that states he was born just north of that spot or at least lists his works?

Until something more is done, there is a very small, slightly desheveled park with a couple of benches on which you might sit and contemplate the amazing shooting star that was James Agee. Visualize your own statue.